While figuring out how much medical negligence compensation costs taxpayers might seem as simple as calculating the sum total of all medical negligence claims, new research from the US shows this is not the case, with other factors throwing a spanner in the works.

Doctors who are concerned about malpractice and clinical negligence claims are considerably more likely to conduct additional diagnostic tests than other doctors, the Centre for Studying Health Systems Change’s analysis found.

This study, which was published in Health Affairs, found doctors worried about clinical negligence claims were 80% more likely to send patients with headaches on advanced imaging tests and 49% more likely to do so for those with lower back pain.

This shows that the additional diagnoses and tests undertaken by worried doctors also influences the cost of healthcare, showing a hidden cost to claiming medical negligence compensation. 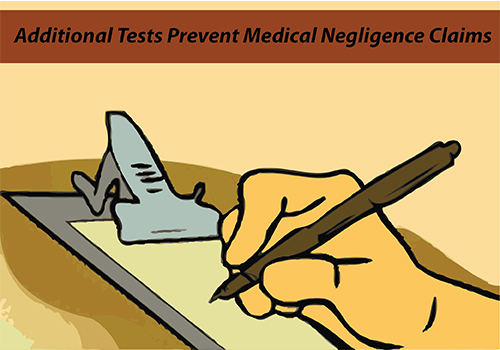 It is worth considering this study in conjunction with research recently published in BMJ Quality and Safety, which involved a 25-year study of medical malpractice claims in the US and revealed that mistakes during diagnosis are responsible for 28.6% of clinical negligence claims, 35.2% of the sum total of all settlements, and almost twice as likely to result in death or disability as other medical errors.

Therefore, if worried doctors are sending patients for additional tests to ensure they are diagnosing them correctly, then they are focusing their concerns in the right area. Doctors could significantly improve patient outcomes by putting additional effort into ensuring every diagnosis is correct – our medical negligence solicitors would suggest the Centre for Studying Health Systems’ research shows one of the major benefits of making a hospital negligence claim is how it improves patient outcomes in the future.

The researchers called this ‘defensive medicine’, with study co-author Emily Carrier saying concern about clinical negligence claims subjects patients to unnecessary tests and increases care costs. Patients might respond that reducing misdiagnosis errors is worth the cost of a few unnecessary tests – it doesn’t appear that these additional tests have put patients at a higher risk, and they could easily have prevented countless misdiagnosis errors.

However, surprisingly, doctors do not appear to be basing their concern off their actual risk – just their perception of their risk. State-level caps on the size of medical negligence claims or on insurance premiums appeared to make no difference to a doctor’s concern about making errors. Perhaps, in reality, worried doctors are not concerned about being liable in medical negligence claims, but are worried about making errors that cause patients to suffer unnecessary harm.

Understanding the relationship between medical negligence claims and clinical care is almost impossible – unpicking all the variables will require a lot more research.