Is Misdiagnosis A Serious Problem In Clinical Negligence Claims

While medical negligence compensation cases take a variety of forms – including errors during surgery, mistakes in the administration of drugs, dental negligence claims and failures to move patients properly, it is thought that misdiagnoses could play a huge role in many cases. 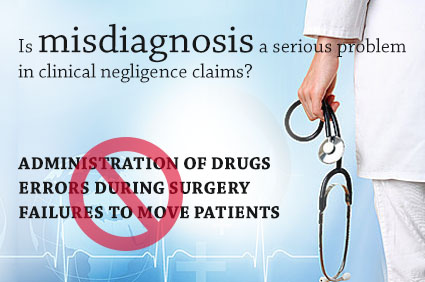 Recently, research published in JAMA Internal Medicine investigated the prevalence of misdiagnosis in real healthcare settings. A lot of the time, when professionals provide their patients with the wrong diagnosis, the consequences are benign and can remain unnoticed, and patients might not suffer any adverse affects, so this problem may be unreported in clinical negligence claims.

Scientists looked at a private healthcare system and a Veteran Affairs facility in the US, reviewing any times patients unexpectedly returned to the facilities after an initial visit and analysing what had happened to cause this return. They recorded a total of 190 diagnostic errors between 1st October 2006 and 30th September 2007, 68 of which were unique diagnoses.

What problems are missed in clinical negligence misdiagnosis claims? 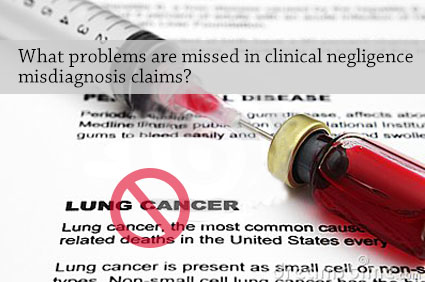 Although these conditions are common, they all pose serious risks for their sufferers, and the misdiagnosis or delayed diagnosis could lead patients to suffer serious adverse effects or even die from their illnesses. In fact, the scientists said the majority of errors could have caused “moderate to severe harm” to patients, had they not been remedied.

So what led to these problems? Unsurprisingly, the most common breakdown in clinical processes occurred during the encounter between the patient and the practitioner, with this error seen in 78.9% of cases. Therefore, patients who are unhappy with the conversation they have with their healthcare provider or who think their ailment is likely to be misdiagnosed would be wise to remedy this problem by expressing their concerns to the provider as quickly as possible.

Other problems were seen to arise during referrals, seen in 19.5% of cases, as well as due to ‘patient-related factors’, which were seen in 16.3% of cases. Errors in the interpretation or performance of diagnostic tests were seen in 13.7% of cases, while problems following up or tracking the information these tests produce was seen in 14.7% of cases. Furthermore, 43.7% of cases involved a number of different factors.

However, it is worth noting that as some of this research was conducted in a Veteran Affairs facility, the illnesses people were likely to present to doctors would be those that are usually experienced by elderly people. Furthermore, while there is no reason to assume that the healthcare facilities examined are worse than those in the UK, the research was still conducted in the US and its findings are not directly transferrable to UK healthcare settings. 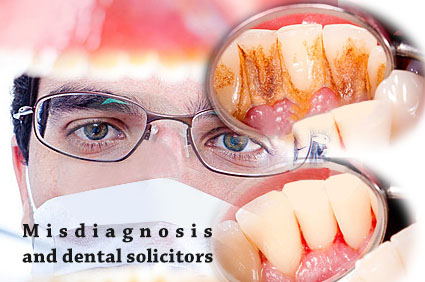 It’s not just solicitors that deal with doctors and hospitals that deal with misdiagnosis clinical negligence claims – dental solicitors frequently handle such cases too. A common problem is when gum disease or gingivitis is missed for a long period of time, which can lead to serious oral health problems including the loss of teeth.

It is tempting for the claimants in dental and medical negligence claims to believe that lazy and incompetent staff are responsible for their injury. However, malfunctioning equipment, inexperience, unusual diagnosis or the concealment of information by patients can all cause misdiagnosis to occur. In fact, some oral health problems can manifest themselves in strange, atypical ways, so a dentist may be reluctant to make a diagnosis until they are certain what they are dealing with. Incorrectly diagnosing someone with a serious disease or showing any indication that a person may have such an illness can cause mental and emotional pain and trauma.

Clinicians should be aware of the errors that can lead to misdiagnosis and should be vigilant to ensure things do not go wrong. Accurately interpreting the problems of patients is vital, but it is also essential that dentists understand all the potential conditions that a patient could be suffering from so they do not misdiagnose the illness.