Want to be Forgotten? Google Launch Removal of Information Form 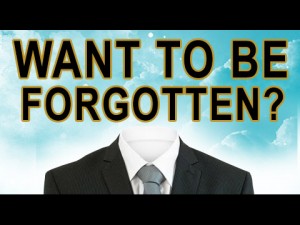 Want to be Forgotten? Google Launch Removal of Information Form

Many of us have done it: posted something online and instantly regretted it, hastily removing it. Although your post may disappear from immediate view, did you know that it can and will remain in cyberspace for years to come? Until recently that is. A new ruling by the European courts means that internet users can now request irrelevant information to be removed from online searches completely – well, almost.

On 13th May 2014, the EU courts in Luxembourg ruled against internet giants, Google stating that people had the right to request information about their past removed from online searches. The case was initiated by Mario Costeja González from Spain who was appalled to find that a news article relating to his financial past was still accessible via the internet. Mr. Gonzálezwas forced to sell his house 16 years ago due to social security debts and anyone “googling” his name would still be able to access information about this. The EU courts agreed with Mr González’s view that this information was now irrelevant, and that this information should no longer be publically accessible. At first it was thought that Google would appeal the decision, but it appears they are taking steps to adhere to the ruling by providing a form that can be used to request links to be deleted. Ironically, Mr Gonzalez’s case and past is now global news and although he has indeed been granted the “right to be forgotten”, it’s not likely he will be!

What does this mean?

Well, although this is an enormous step for Google, things are not quite as significant as they first may seem. Yes, you can send a request for certain information to be removed from links, but the information will still be present on the internet. It may be a little more difficult to find, but if someone wants to find it, they can. The ruling specifically states that inadequate, irrelevant or excessive information about a person should be removed from searches, but this is of course open to interpretation. Even more worryingly, search engines outside the EU, including Google.com are exempt from the ruling and searches via their services may still lead to the information you wish to remain hidden.

The impact of the ruling goes further than the deletion of embarrassing photographs and drunken posts, and has more serious implications for those with a criminal past they would rather everyone didn’t know about. However, if you are a high profile criminal hoping to disappear from the internet, you can forget about it, as Google still has the right to reject requests on the grounds that it is in the public’s interest to know about your criminal activities.

So, What’s the Point?

It may seem a bit pointless to even try to make your past difficult to find on the internet, but to those worrying that their past may interfere with future job prospects, the ruling may indeed be the solution. However, the process is set to be a lengthy one, so is by no means a quick fix.

Keep up-to-date with developments in this case and other legal news on the Clearwater website and blog.