The recent Keogh Review into the NHS unveiled a lot of specific details indicating that medical negligence claims and malpractice occur too regularly in some of the UK’s NHS Trusts. While the overwhelming majority of hospitals provide an excellent standard of care, our clinical negligence solicitors still deal with far too many people who have been injured as a result of NHS treatment.

While the review made a lot of specific suggestions, improving communication within the NHS and supporting whistleblowers could deal with many of the problems reported on by Sir Bruce Keogh. Ensuring healthcare workers are engaged with the running of their workplaces and supporting them when they speak up could lead to the cultural changes the NHS requires if it is to prevent hospital negligence claims.

If doctors listen closely to their patients and hear their concerns, they will be able to articulate these concerns to the hospital’s management, helping to improve standards of care. Medical negligence compensation claims frequently involve cases in which patients have complained about their care or raised concerns, but these concerns have not been listened to.

Other potential ways to reduce clinical negligence claims include ensuring that the right people with the right expertise are employed within hospitals, and that patients only use NHS hospitals when they need to. This could be done by offering better social services and community care – in an interview with the Independent, Sir Bruce suggested improving these services could result in a 25% reduction in the number of patients hospitals have to deal with. 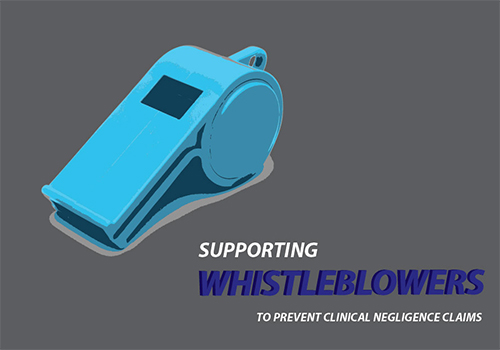 The UK has long been proud of how it looks after its most vulnerable people, and the NHS is a key element in this tradition. While personal injury claims have arisen in hospital since they first began, increasing transparency, improving data collection and better access to legal representation has meant this issue has never been as widely known.

In the wake of the Keogh Review, transforming the culture within the NHS will be a challenge. The NHS has handled a lot of top-down reorganisations in recent years, however, and these cultural changes should not be beyond its capabilities.

If doctors believe that a patient’s wellbeing is being compromised because of their colleagues, they have a duty to raise concerns. They should also aim to develop a culture in which whistleblowing is encouraged and in which staff feel safe to raise concerns.

A huge range of pressures may be undermining this duty, from falling staff levels and squeezing budgets to increasing numbers of patients and a feeling of loyalty among co-workers. While healthcare workers are legally protected when raising concerns about patient safety, a huge range of other pressures can influence whether or not they will actually do so.

Unpicking these issues and bringing forward the cultural changes that the NHS requires will not be a simple task, but it is not beyond the capabilities of the UK’s healthcare system, and is well worth doing in the interests of patient safety.