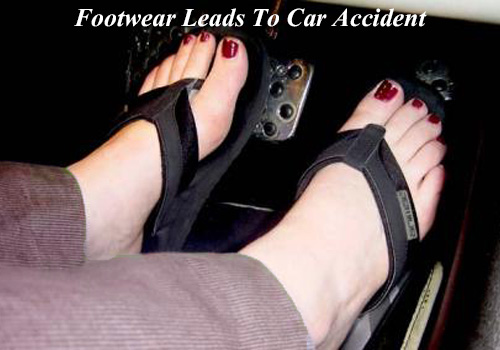 When people get behind the wheel, they might not even think about their footwear choices, despite the fact that failing to do so could lead to motor vehicle accidents. In fact, the Highway Code explicitly states that people should ensure their clothes and footwear do not hinder their use of the controls before they set off. While failure to adhere to the rules in the Highway Code is not necessarily a criminal offence, doing so is a strong indicator of liability in car accident compensation claims.

Despite this, recent research from Sheilas’ Wheels found 59% of drivers admit to having worn unsuitable footwear while driving. Furthermore, it revealed 24% of British motorists have actually got their foot stuck under one of the pedals while driving – an error that could easily lead to road accidents.

One-fifth of all respondents said they had never even thought about how their footwear could impact their driving, and while 36% of women say they carry an extra pair of driving shoes in the car, only 12% of men do. Only 14% of respondents said they have ever decided not to drive because of concerns their footwear could have led to a road traffic accident.

Flip flops were cited as the most dangerous item of summer footwear by British drivers, with 51% of people struggling to drive in them. A study commissioned by Sheilas’ Wheels revealed that flip flops add 0.13 seconds on to braking time – at 60mph, this could represent the three-and-a-half metres between liability in a road accident compensation claim and a safe drive.

But not only do flip flops reduce braking time, they also increase the amount of time it takes for a motorist to move between the accelerator and brake by 0.1 seconds and cut a person’s braking force by as much as 3%, which can lead to an additional four metre braking time at 60mph.

Other dangerous summer footwear respondents to the poll cited include sandals, espadrilles, wedge heels and bare feet. Sheilas’ Wheels suggest that as many as 1.4 million road accidents and near misses could be caused by inappropriate footwear every year.

Our personal injury solicitors in Burnley know the importance of sensible footwear while driving. While driving shoes might not be the most fashionable footwear possible, they could one day save your life.

Comfort is the most important factor – you could be driving for hours, and if your feet start becoming numb, you could find yourself in a motor vehicle accident.

Soles should be relatively thin – around 4mm, with a maximum of about 10mm. You will need to ensure that your shoes are thin enough for you to be able to press one pedal without touching the other.

There are specially-made driving shoes available, and buying them could one day save your life. Trainers or moccasins are quite effective, providing plenty of feeling and grip while ensuring the foot does not become tired from pressing the pedals. High heels and wedges can make it impossible for drivers to tell which pedal they are using, heavy boots can put too much pressure on pedals, and bare feet can become sweaty or tired.

If you are unsure whether or not your shoes are safe for driving, then follow your gut and buy another, safer pair. Keep them in your car so you’re prepared throughout the year.